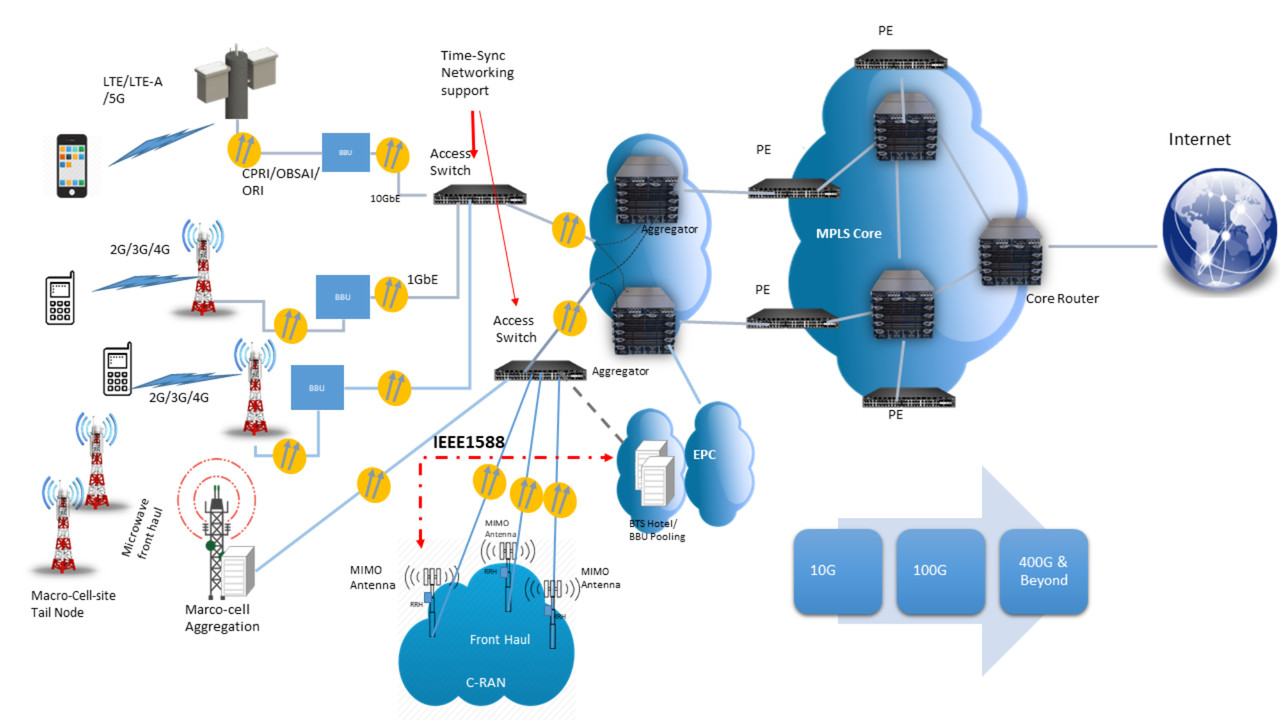 Gothenburg is a port city nestled within the unique Kattegat (a sea area considered neither North Sea nor the Baltic Sea, a contradiction in itself) nearly 290 miles northwest of Stockholm, capital of Sweden. The days are gloomy here specifically in the fall season and in the winter, fortunate to have a glance of sun if you are lucky yet the city has much to offer. Gothenburg’s panoramic beauty is certainly something to behold. From its historic buildings to classic culinary, this largest port city of Nordic region has something to offer for everyone. However, I am not here to indulge in her beauty rather in a quest to learn about technological trend in optical networking and present whitebox open networking solutions in telecom network transformation at the European Conference on Optical Communication (ECOC 2017). I was quite amazed by noting the advances in photonic technologies, more importantly available technologies for 200GbE to 600GbE transports and how optical networking is paving the way for mobile networks to accommodate higher bandwidth. For mobile networks, optical networking now starts at the cell tower and D-ROF (Digital RF over Fiber) techniques used for transport. In fact, wireless and fiber convergence is something interesting and will shape the LTE-A, 5G transport networks, thanks to the advances in D-ROF technologies.

The D-ROF techniques allows a split architecture in which BBU (Baseband Unit) and Radio Remote Head (RRH) can be separated contrary to traditional deployment where BS (Base Station) includes both RRU (Radio Remote Unit) or RRH and BBU.

Figure 1. Traditional Cell tower with coaxial cabling system.
Now, RRH performing analog processing is mounted in the Cell tower due to smaller size and weight and BBU performing baseband digital processing can be placed at the base of the tower or in a remote location connected through fiber. D-ROF was developed around year 2000 and since then it has received significant interest. Its counterpart A-ROF (Analog Radio over Fiber) did not get standardize due to physical layer impairment over long distance (Haddad & Gagnaire, 2014). Radio signals are digitized at RRH and then transmitted over fiber to BBU according to one of the protocol mechanisms listed below:
D-ROF creates a potential for high bandwidth support as needed for 5G despite some of the challenges in standardization and connecting multi-vendor BBUs. Overall, it offers the promise of CAPEX and OPEX reduction.

The CPRI is an important element of mobile fronthaul networks. It connects RRH (Radio Remote Head) and BBUs with fiber instead of traditional copper or coaxial cable. As of today, traditional co-axial based cell towers are undergoing complete overhaul from bulky, expensive and power hungry cabling system to fiber optic cabling for longer-reach distances and more capacity.
The CPRI initiative started in November, 2003 as a cooperation between five companies: Ericsson, Huawei, NEC, Nortel Networks and Siemen’s mobile (CPRI, 2015). As of writing this article, only four organization currently involved in this evolving specification: Ericsson, Huawei, NEC and Nokia (CPRI, 2015). The specification only defines the key criteria for interfacing transport, connectivity and control communications between the BBU and RRU. It is one of the protocols for D-ROF (Frigerio, Lometti & Sestito, 2017) and considered more efficient than OBSAI and ORI (Haddad & Gagnaire, 2014). 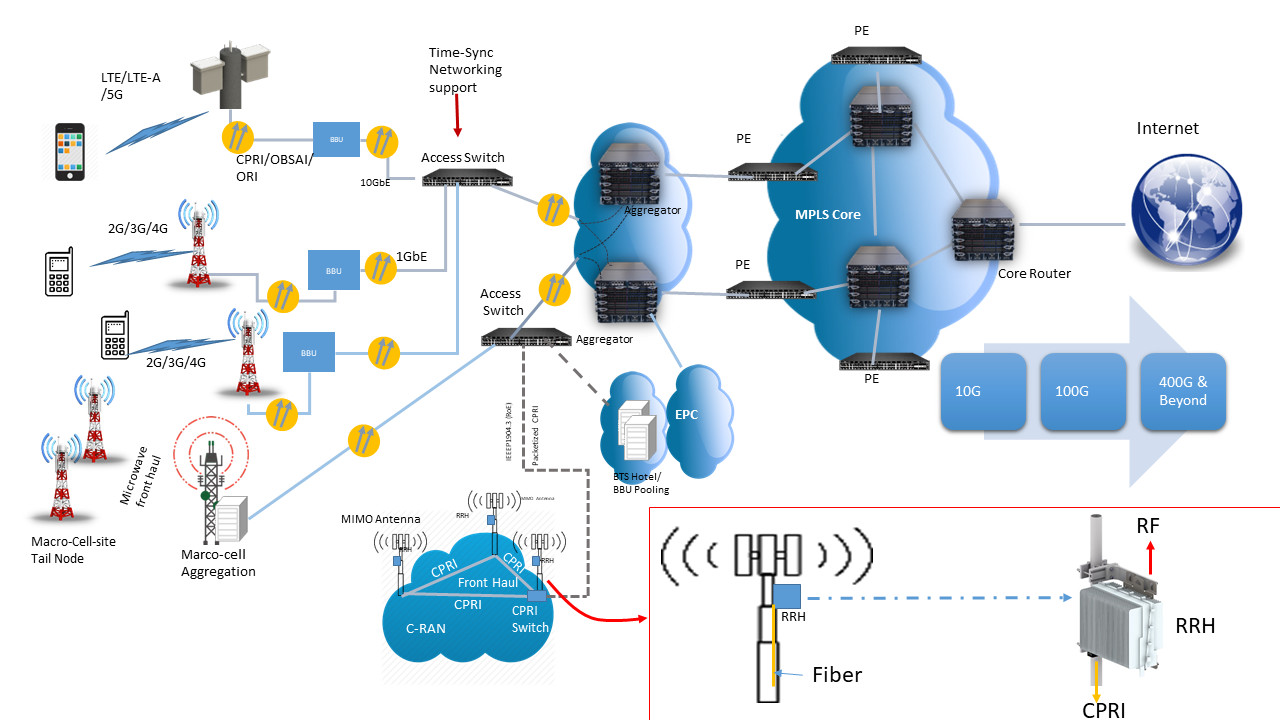 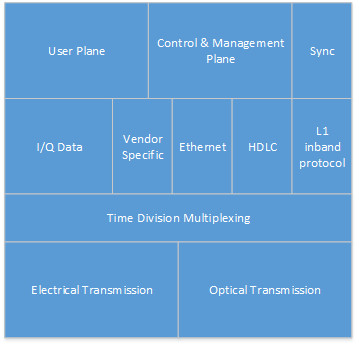 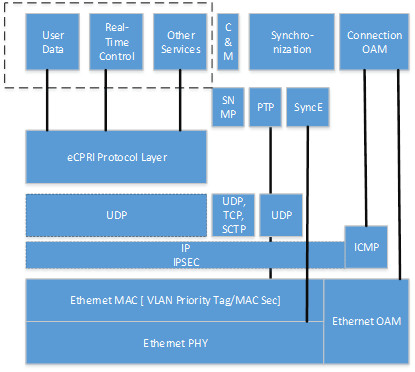 Figure 4. eCPRI Protcol stack overview (eCRPI, 2017).
The eCPRI is compatible to point-to-point and Point to multi-point legacy CRPI as well multipoint to multipoint transport. More importantly, eCPRI enables the possibility of extending IP based Ethernet transport network to fronthaul at the Cell tower.

Unlike CPRI, OBSAI is an initiative for open base station but also defines interface between RRH and baseband unit. The OBSAI forum started by Hyundai, LG Electronics, Nokia, Samsung Electronics and ZTE Corporation in 2002. Its goal is to create an open market for cellular base stations (BTS). There are four components to OBSAI architecture: RRH block, Base Band block, Control & Clock block and transport block. 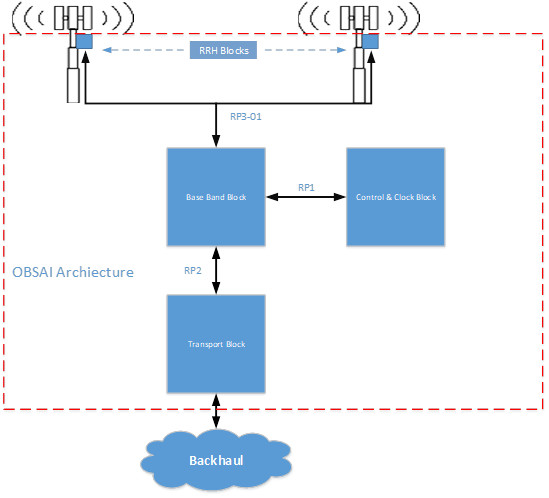 Although both CPRI and OBSAI attempted to created open industry standard for D-ROF including support for Ethernet communication interface, both are still considered “semi proprietary” in nature. This led to creation of ORI standard by ETSI (European Telecommunication Standard Institute) in2010 to provide more flexibility and choice of BBU and RRH suppliers. The ORI standard is the result of requirements work undertaken by NGMN (Next-Generation Mobile Network) alliance. 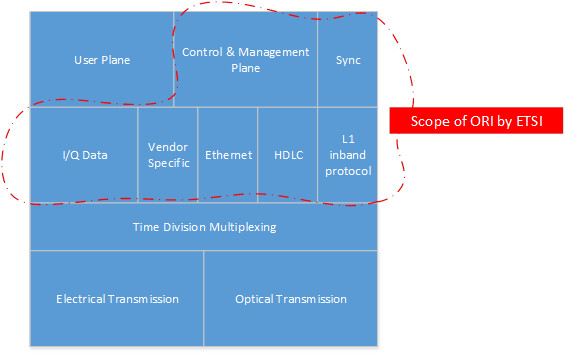 Parallel to the work of CPRI, OBSAI and ORI to support Ethernet, IEEE initiated P1914.3 project to standardize Radio over Ethernet (RoE) encapsulation and mapping capabilities for the front haul transport between RRH and BBU and applicable to RF interfaces like CPRI, OBSAI and ORI. The standard specifies: a) encapsulation of digitized I/Q (In-phase Quadrature) payload, vendor specific and control data/flow into Ethernet payload, b) header frame format both structure-aware and structure-agnostic encapsulation of existing digitized radio transport formats, and c) A structure-aware mapper for Common Public Radio Interface (CPRI) frames and payloads to/from Ethernet encapsulated frames (IEEE, n.b.). Though IEEE P1914.3 standard is yet to be ratified, it creates possibility for wider adoption due to strong industry support of IEEE standards for Ethernet. The typical packet format for RoE is shown in figure below; Ethernet frame format remain unchanged.

Figure 7. Proposed RoE Packet Format (IEEEP1914.3, 2017).
According to IEEE P1914.3 draft, various Ethernet based topologies will be supported at CPRI which includes point-to-point, point-multi-point, multipoint-to-point, ring, tree and chain. Timing synchronization is possible through protocol such as IEEE1588 (ptp). 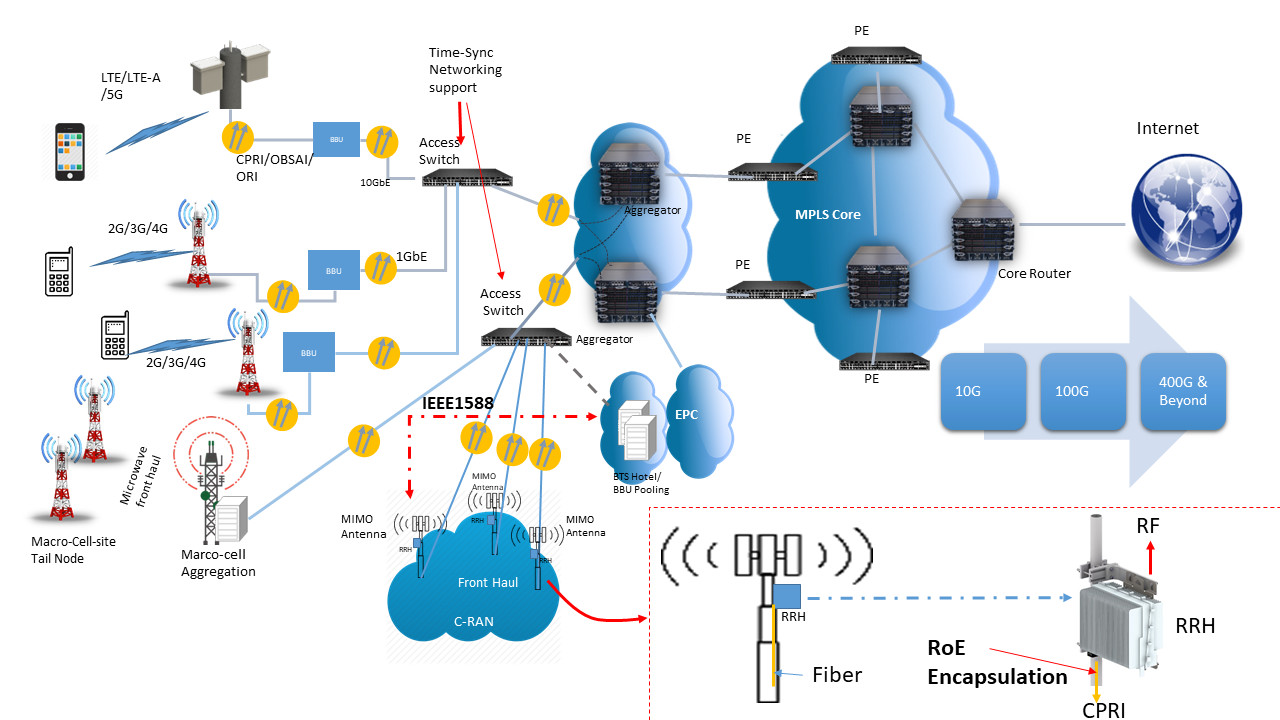 Figure 8. IEEE P1914.3 implementation for C-RAN.
Interestingly, RoE allows encryption and decryption of links and flows. However, technique for this implementation is not specified in the standard.

Ethernet at Optical Front haul Network: The case for White-box

The advances in D-ROF technologies such CPRI, OBSAI and ORI in separating RRH and BBU to be deployed over long distance is essentially creating possibilities for mobile operators to be benefits from CAPEX and OPEX reduction. More importantly, IEEE P1914.3 standard will make it easier for industry wide acceptance of fronthaul Ethernet network. As such, it is expected that with support from merchant silicons white-box suppliers will support implementation of RoE in their switches. Moreover, some of the whiteboxes, e.g. Agema’s AGC7648A already offers SyncE and 1588 support with advance buffering technique that will be ideal in such deployment. In addition to significant cost savings offered by white-box, this disaggregation model would pave the way for further development in multi-tenant services at cell tower level. Similarly, the deployment will also benefit telecom infrastructure to support higher bandwidth capabilities for 5G and improve service offerings.
Reference: